This picture of  brother & sister was taken two years ago. He was her transportation on the tricycle while she stood on the fender, holding tightly to him. 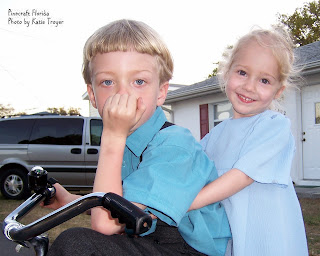 Two years later they are back again on my street, and so this morning I asked them if I may take another picture of the two? He gave me permission and so here they are. She is five years old and you may not notice it but on the back of his three-wheeler bike he is carrying her baby doll. The baby doll is nestled down in her car seat. 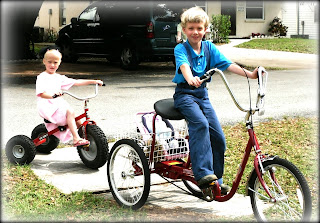 Yesterday there was a benefit breakfast at the Pinecraft Park, with the proceeds going to the local Amish church to help pay the expense of rebuilding the church building. The rebuilding was done a year ago but there are still payments to be made.
A good number of people showed up for the breakfast of pancakes and sausage. Dan Stutzman and his wife Martha were in charge of the breakfast. And this photo is Dan. 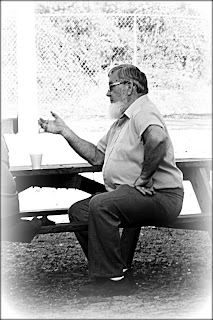 Lee Keim one of the local Amish is eating his breakfast on the run and visiting with John Henry Whetstone who is offering refills of coffee. Well, at least he was offering coffee but he stopped to chat with Lee. 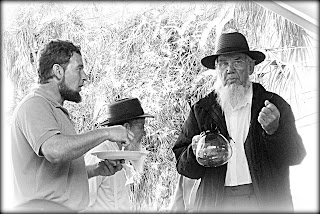 This is Dave Dannie from Ohio, although they are winter residence in Sarasota. Him and his wife Mattie are serving the orange juice. Mattie, his wife is on the other side of Dannie. They used to be our neighbors years ago in Ohio. 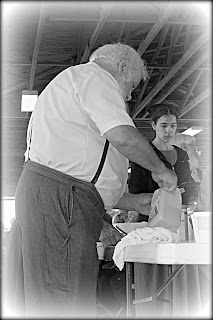 I shared the picnic table with a local couple originally from Boone North Carolina. So out of the blue I asked them if the people still raise Marijuana back in the mountains? The man I asked this question looked like a preacher, although I don't know if he is one or not. But he took a bite of food, swallowed and said, "No, but Moon Shine is still done, just a little." His statement was not recent evidence but when the still lived in NC twenty some years ago.
This conversation reminded me of a happening in Cookeville Tennessee. One time a small patch of Marijuana was discovered in our woods out on the main highway next to the Market, obviously planted by someone because the plants were in a neat little circle. I admit we were all taken up with the find, at least us who had never been exposed to anything so evil. Christiana Stoll wanted to carry one plant home to show to her Mom. I don't remember if she plucked a weed or if one of her brothers gave her one, but after she had the plant in her possession, we had to walk the busy highway in order to get to our little back woodsy road. Since she didn't want to be caught by the police, nor have the worldly neighbors see her carrying Marijuana, she carried it behind her back with a look of total guilt on her face. She would have walked the whole stretch of highway like this if it was up to her. But I told her to carry the plant in front of her and act normal, which she did and her Mom took care of the Marijuana. Although I don't think anybody tried smoking it.
at March 20, 2011 17 comments:

I am trying to read the their faces. I am assuming they are a dating couple because he has no beard, nor a trace of one. They are heading back up north. 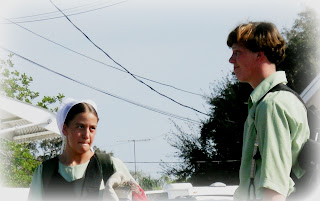 Another view of them, dressed alike as far as color goes. 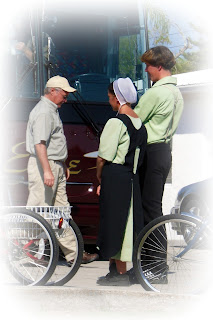 Someone came in with a whole pick-up load of luggage and five girls. They were all dressed alike except one of them. These pictures remind me of how it used to be, someone decided what color to wear and so the whole group agrees. It is just a way of Plain life. 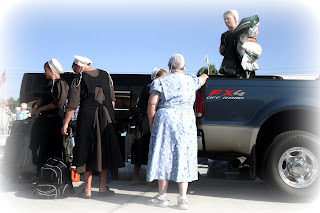 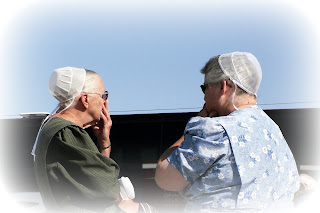 This man looks like he polished his face, combed his beard, brushed his dentures and cleaned his glasses for the long journey home. It is a way of life. 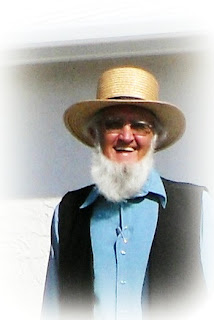 The Bald Eagle Comes for a Visit

This afternoon we had a very welcome visitor at the park. 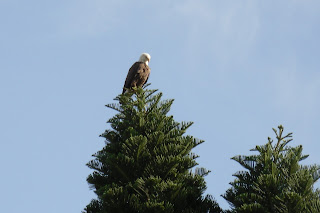 One guy tried to shake the tree to make it perform but neither the tree nor the Bald Eagle budged. Then the hand clapping began and finally he decided to get off his perch and fly across the creek. Even so he was followed by a photographer with a powerful scope and the hand clappers. 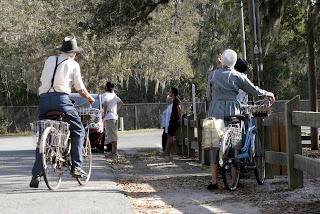 I am not sure if this is a father& son, or grandfather with grandson. 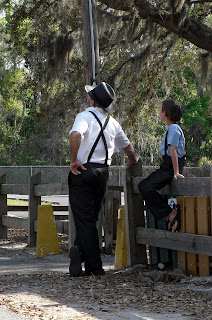 My neighbors down the street feeds the birds in their front yard. 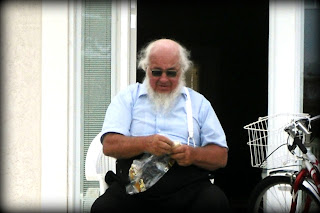 Gets out the bread crumbs and throws them in the air one by one... 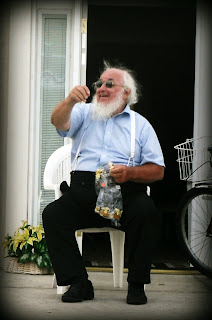 And in the birds walk. One bread cube fed two birds, for the simple reason two birds fought over each piece. 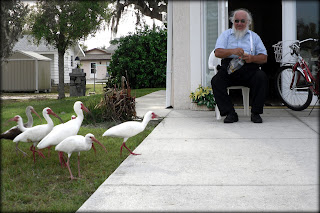 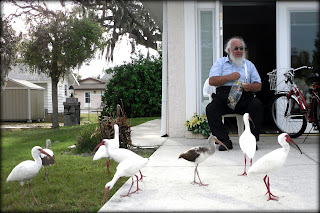 I know this gal but I don't know or can't remember her name. I have long quit trying to remember names because people keep coming and going all year long. Some I see for months, others just a few days or weeks. I don't have the kind of memory system that remembers the name of every person I come in contact with. But I still love meeting people.
This lady works for the Overholt Produce Stand and whenever she has a spare moment she is working in the flower bed. 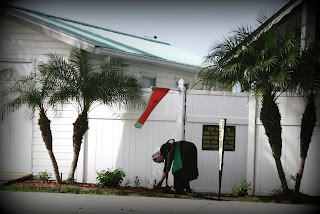 Finished and a job well done. 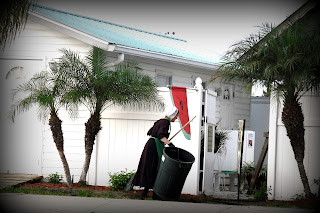 Sam Eicher from Allen County Indiana is a winter resident here. He loves to fish and so he keeps his fishing poles in top-notch shape. 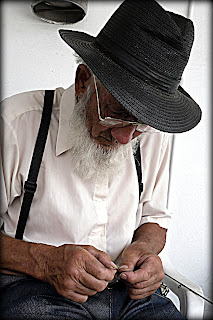 Putting a new hook on the line and tying the knot. 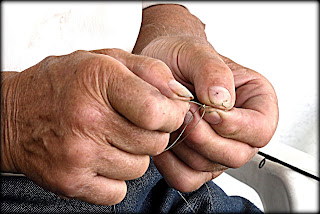 Trying out the fish line. I asked him if he fishes in the Phillipp Creek. He said, no he fishes way out where the water is clean instead of brackish. He also uses life shrimp to bait the fish. 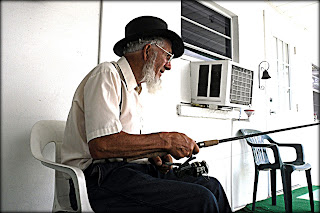 Some of the regular city people that fish at the park use dough ball for bait and lure the fish in by throwing out  oatmeal that has been soaked in water to bring the fish in. A week ago these people walked away with 30 fish. I am sure it is good eating for them, but well not for Sam...
at March 06, 2011 No comments: