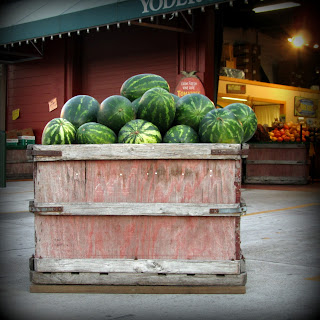 Watermelons waiting to be pushed inside for the weekend. 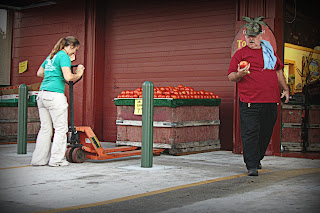 Moving the tomatoes inside and the night watchman, Leander Coblentz. Tonight he resembles a tomato for his head is lined up evenly right smack with the tomato sign, plus he is looking at a tomato he picked up from the cement. 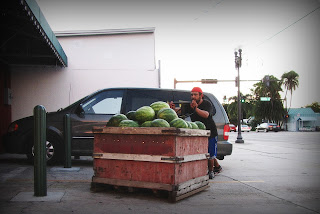 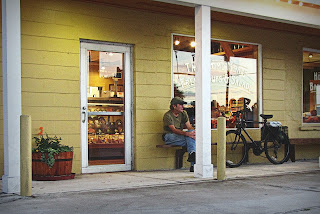 In Memory of Becky Fisher

When I first started coming to Pinecraft during the winter months of 2002-03, I saw Becky Fisher occasionally here and there. I was living on the north side of Bahia Vista and she was on the south side. I was shy and bashful and lived in constant culture shock the first season I was here, and so I basically stayed in my own territory. I never ventured far from my apartment. Two winters later Becky Fisher and I both were in a seminar sponsored by the Overholt Family. 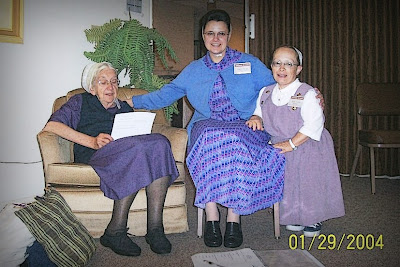 Becky and I were in the same small group, along with this wonderful lady in the middle. It was then that I heard snatches of Becky’s life as a little girl. I don’t know all the details but she lost her mother at the tender age when all little girls need their mothers.  She was placed in another home and with time her father remarried and as far as Becky was concerned it never went well, which it probably didn’t go well, at least not with her.


After this seminar we met occasionally on the street and visited with each other. Basically the visit was always one-sided, about her cares and problems and what causes her cares and problems. I let her talk because she needed a listening ear. By the time I came to Pinecraft most people had crossed her off as a hopeless case or at least Becky thought they did. No, the people actually did because Becky was next to impossible to get along with. She was a feisty fighter and fought her way through everything and everyone. People just learned to leave her alone, step out of her way and move on with their lives. It is not that the people didn’t care about her, they did and tried to help her but Becky was Becky. But because of people backing off she became lonelier and more alone.


Becky and I became friends when I moved to her side of Bahia Vista and stayed in Pinecraft year round. So for the last six years we were friends. She’d buy me an ice cream cone at Big Olaf now and then and I bought her a meal at Yoder’s for her birthday. Most every day we met out on the street where we would visit. The day in 2007 when I left Pinecraft and moved in with my Dad in Ohio, she wept. She said every time she has a friend they move out of Pinecraft and then she is without friends again.   But a year later in 2008 after my Dad passed away I moved back into Pinecraft and we were friends again. And so life for the last three years were the same, we both went our own way, she doing her things and I did mine and when we met on the street we would stop and visit.


Most if not all of us expected her life to end in an accident. She had no respect for street safety. She crossed four-lane streets where ever she wanted to with her electric scooter. She even went north on southbound lanes or vise-verse, with a police car behind her blinking his lights for her to stop. She wouldn’t stop but just turned off and the police let her go. Night times she would be out on Bahia Vista jay-walking or jay-driving. Many a time people admonished her to be more careful but she always replied with, “What does it matter. Nobody cares what happens to me”. But people did care.


Around the first of August I suddenly realized that I haven’t seen Becky all week, not once. So I called her niece and was told Becky is not well. She never was out in the streets again for the last six weeks or so. Instead she was in the hospital a few times and people came and went every day to do things for her, to help her out, bring her food and, well the bottom line is the neighborhood did care about Becky. They cared for her. When she needed 24hour care one of her former friends whom she used to babysit years ago moved in with her and stayed…


I didn’t visit her often in her home after she was sick. I was there for her when she was well and lonely and needed to talk, but during her last month of life she had people in and out. She had people around her that cared for her spiritually, physically and in every way. She died in peace. It appears like all was well in the very end. 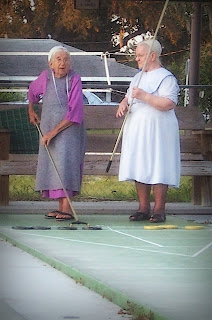 Becky at the shuffleboard - this was taken in October of 2006. One of the few times she helped play shuffleboard. 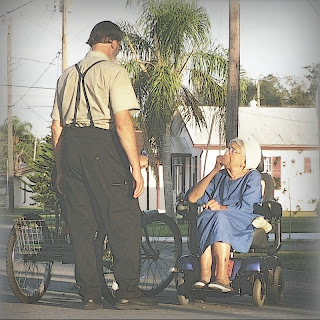 This picture was taken less than a year ago. I don't have the exact date but was before she was on oxygen. I confess I sneaked these pictures of Becky as she never wanted her picture taken. It was not that she was against the camera. Instead her reason was always she is too ugly. That was her opinion of herself.

Last night at the visitation hours

We will miss her because a part of Pinecraft is gone.
This is my version or perspective of Becky. And if the neighbors want to agree or disagree, that is up to them.
at September 20, 2011 17 comments: Links to this post

The Coming of the Pioneer Trails 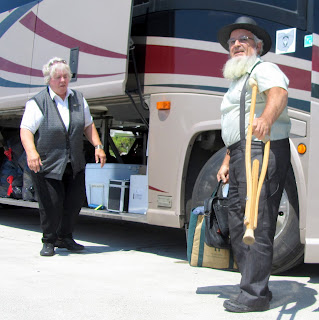 The Pioneer Trails bus came in today bringing people from Ohio and Indiana and maybe elsewhere too, en route to Florida. John Beachy from Ohio is shaking his crutch at me as soon as he gets off the bus. 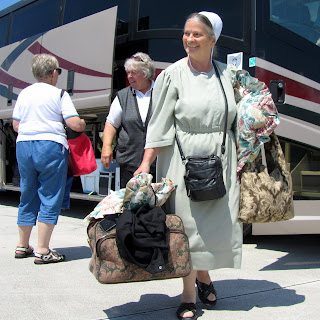 Another passenger was Mary Ellen Mullet. I doubt she is down here to stay since her husband isn't along but anyway she is here. 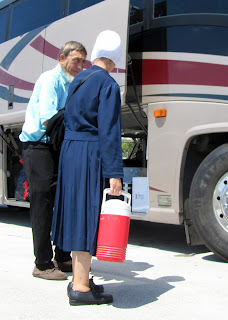 I forgot what this man's name is but she is Maria from Allen County Indiana. Here she is having a few words with her husband... 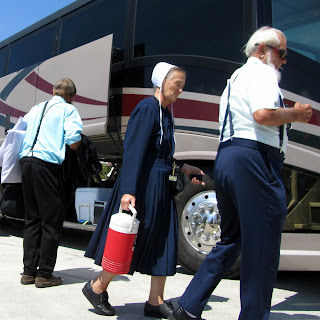 turns from him and follows another man, Crist Petersheim to be exact. Less I start a rumor things are not the way they look, Crist is taking their luggage to the apartment and Maria & her husband crawl into another vehicle.
at September 13, 2011 3 comments: Links to this post 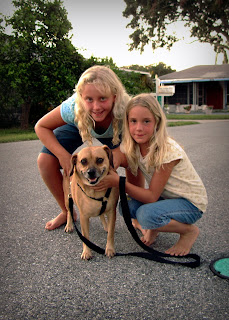 Sisters from Bradenton who are visiting family in Pinecraft. They were out walking the dog and we stopped to visit for a few minutes.
at September 11, 2011 1 comment: Links to this post

Thank you Saloma for tagging me with this Liebster Blog. Saloma's blog is http://aboutamish.blogspot.com .
at September 05, 2011 2 comments: Links to this post 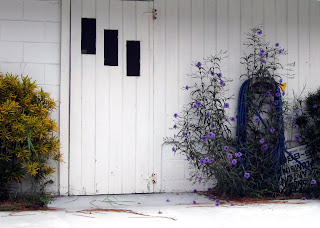 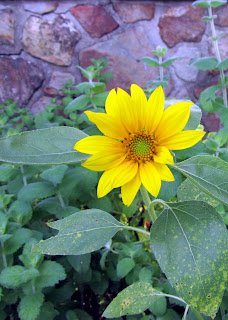 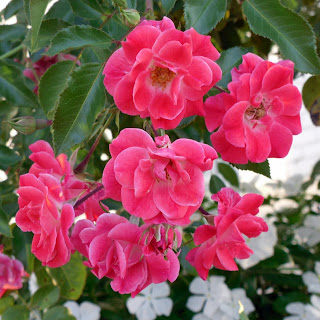 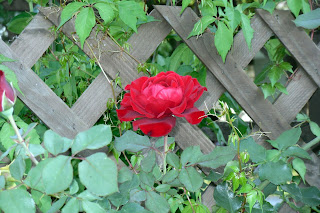 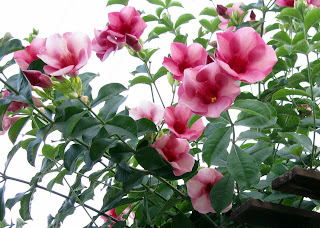