These pictures were taken tonight at the park just a little bit before dark. Anymore I think this is the best time of the day to be out with the camera. 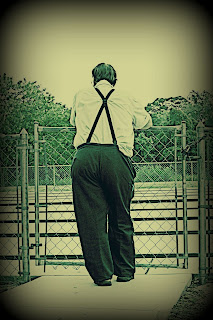 I guess obviously the Volleyball net is good for more than just playing Volleyball. It also serves well as a monkey bar. By the way these children played and hung on the net, it wasn't their first time... 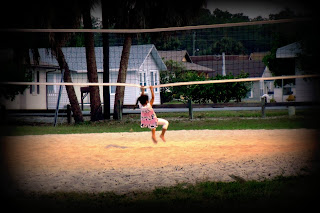 Today the Pioneer trails bus was three hours late due to the tornatos and storms last night. The bus missed the storms but twice they came upon the after effects of trees down and trucks rolled over. And so they had to wait until the road was cleared again before continuing. Tomorrow about 40 people head up north on the bus. I asked the owners where all these people come from as it seem there are not that many people around anymore. Irene said, "We are rounding them up." Must be they are around somewhere. But then for two weeks there is not going to be any bus services.
at April 29, 2011 2 comments: Links to this post

Gone Fishing at the Fishing Hole

I always love to take a peek down to the fishing hole on the Phillippi Creek in the park. The people always have their backs turned, so I only see their backside. This is the way it ought to be as I don't look at them from across the creek. 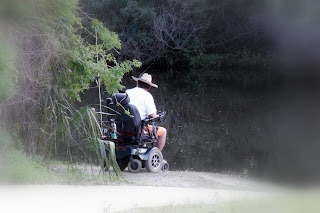 I don't know who this woman is for I have only seen her a few times at the park but for some reason this shot reminds me of Eve, Adam's wife. I am assuming Eve also had to go fishing after the fall in the Garden of Eden. I am also assuming they used fish. If not for food, certainly for fertilizer to give their corn a booster. 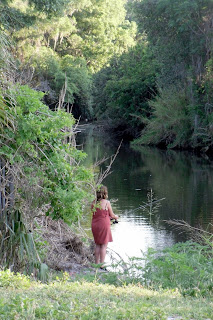 Emma reminds me of patience and contentment, of deep meditation as she sits on her five-gallon bucket a fishing. 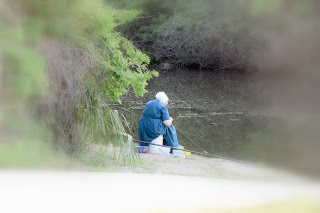 I have always said Pinecraft is like a Ghost town during the summer months. Eighty-five percent of the houses are empty, locked up and shades are drawn. The average from May through October is about four people per street throughout Pinecraft. The whole atmosphere of Pinecraft changes, but we year round people are not entirely left to ourselves, for others drift back into Pinecraft. Every October these people hide in the woodwork and emerge out again sometime after mid-April. And so we keep an eye on each other’s properties, just to see that no water pipes burst or nobody moves in by the back door. So I am keeping an eye on my landlord’s house.


This past week someone from across the street was seeing a dim light, a shadow & movements in the window of my landlord’s house as they sat in the dark on their front porch in the cool of the evenings. The father and the son walked over to my house the next day or so and asked me if I let someone in the house or know of anybody in my landlord’s house? No, I haven’t seen nor gave the keys to anybody. I was told what was been seen and so I called my landlord and left a message on his voice mail telling him about the guy in his house, expecting to hear back from him within a short time. I got no reply from the landlord for a few days while the shadows continued to pass in front of the window every evening.  Some nights there were three shadows seen at the same time.  Saturday evening I was desperate in wanting to know what to do and left another message for I didn’t want to call the police without my landlord’s permission. Somehow that fear of someone hiding in plain sight was growing bigger and more frightening.
Finally my landlord returned my calls Sunday afternoon. He had a very busy hectic week with a death and funeral in their home church, plus a son moving and having church services in their own home and he was helping out at all of these places.  But when he called, he gave specific instructions of what he wants done; wait until we are certain they are in the house and then call the police so they can be caught red-handed. So I told my two neighbors who helped keep an eye on the house of what we are supposed to do if and when the movements of their shadows are seen again.
That very evening at 10:00, the dim light flicked on again and the shadow looked out the window and there he was in plain sight to whoever sat on my neighbor’s front porch. So the neighbor walked over to my home which is right next to the landlord’s house and told me that he is back in. So I threw to the wind a good night’s sleep, as I grabbed my jacket and keys to my landlord’s house and walked in the dark over to my neighbor and called the police from their place, their front yard where we can keep an eye on the house and all the action that was going to pour out of that house shortly.
I was told by the police station not to approach the house and was asked where I am at the moment. I gave all the information they asked and promised to keep my distance and they said someone will be there shortly to check out the house. We waited a few minutes maybe five or ten and the cruiser pulled up. He asked some questions and we told what we knew.  The officer patted his gun, took his dog on a leash and circled the house with his bright flashlight going into every nook and corner. He returned and said every door is locked and it doesn’t look like any activities going on in the back of the house. He put his dog back in the cruiser just as another officer arrived, so the two took the key opened the front door and announced in a loud voice they are searching the house, which they did. We watched from a safe distance the movement of their flashlights as they went through every room, up and down the walls. The officers came back out again and locked the door behind them. Their report was they can’t find anybody and it doesn’t look like anybody is staying or hiding in the house. There was simply no evidence to be seen throughout the house. So the two left again, telling us to keep an eye open and give them a call anytime.
As soon as the cruisers left the window lid up again and I saw with my own eyes the shadow of a person moving around inside the bedroom!  It was a bold shadow, like “Ha, here I am! Catch me if you can!” For a few seconds we looked, in stunned silence, shaking our head in confusion, not believing what we are seeing. But it was there! The light was there, a shadow came and went and the light went out and the house went dark.
The nerve! What in the world was going on? Where was he when the house was searched? As soon as the police left, he was right back in the window, looking out!
I sat there and thought and looked at that window, and the light clicked on in my head. Could it be a motion light on the next porch shining into my landlord’s window and casting the reflection on another neighbor’s porch?    I suggested the possibility and we checked it. The neighbor with the motion light walked around her front yard at our bidding and sure enough the light snapped on in the landlord’s house and the shadow appeared in the window. And so I had called the police to arrest a neighbor’s shadow in my landlord’s house. 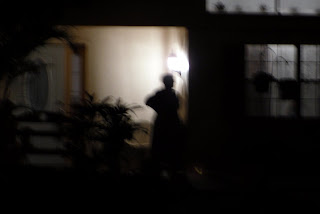 I finally got the butterfly and the bee. Well one of the bees. I did a lot of shooting until they sat down long enough to get a good aim. 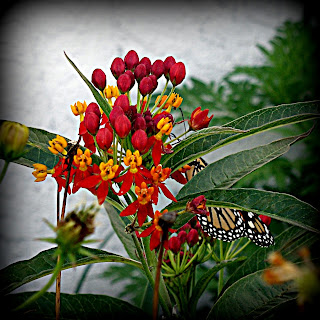 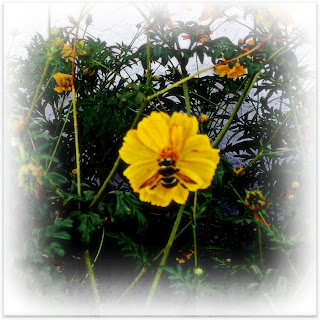 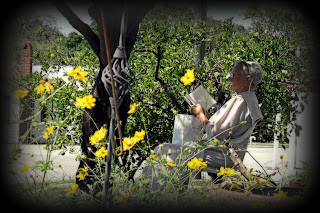 I come to the garden alone to read. No, not really a garden but Lydia Mae Schwartz is sitting under the shade of a tree to read. I happened to see her through a flower bed.
at April 06, 2011 4 comments: Links to this post

The Return of the Stone Age

The Stone Age people have returned to Florida to reclaim their land. 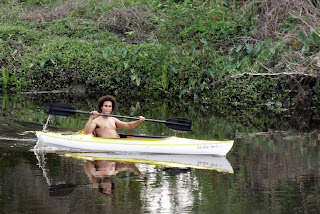 He brought his beautiful bride with him, to reclaim and populate the land. They paddled upstream toward the heart of Sarasota. Maybe that is their starting point. I probably won't live long enough to see the outcome, which might be just as good. I like my computer and cell phone too well. And my electric toothbrush. And my hot water... 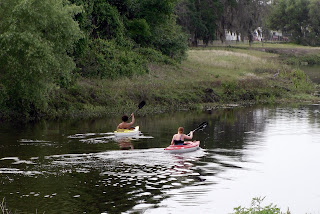 We are going down the valley,
with our faces toward the setting of the sun. 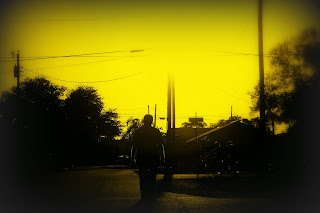 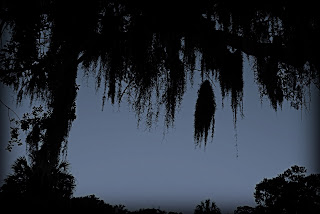 Maybe it is because Pinecraft is empty...
Maybe it is because my neighbor's funeral was yesterday...
Pinecraft is constantly shifting and changing. In the winter months Pinecraft groans under the weight of thousands of people. Pinecraft felt the vibrations of masses of people going up and down the streets. It groaned under the jumping up and down going after the volley ball and  after the basket balls. It was constantly feeling the push of being shuffled back and forth on the Shuffleboard courts. And suddenly Pinecraft is emptied out. The people disappeared by the droves, by the dozens, by the hundreds. And Pinecraft swings and sways quietly in the evening, at dusk alone, like the Spanish Moss.  And Sam walks toward the setting of the sun.
at April 02, 2011 2 comments: Links to this post