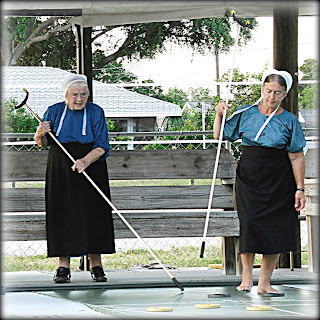 These two are Kauffman brothers. Their Dad was Ben Kauffman. Ben had a brother Sam, Sam had a son Roman Kauffman, and Roman married my cousin Mary Troyer Kauffman. So I am posting these especially for the Roman Kauffman family. The one on the right reminded me of a Kaufmman long before I knew he was a Kauffman. He basically reminded me of his Uncle Sam. Click on the pictures to enlarge. 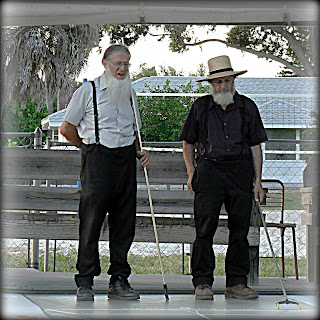 Both brothers are left handed, at least when it comes to shuffling. 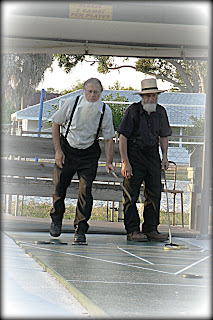 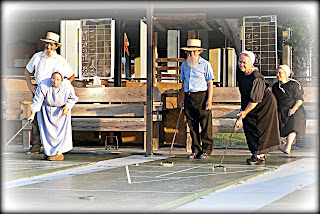 The other Kauffman's wife. She looks like a happy, down to earth barefooted woman. 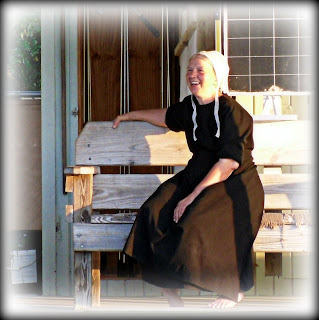 This is the time of the year when we have beautiful sunsets. This one was last night on the bike trail at the park. 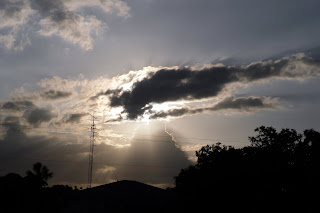 And this was tonight's sunset on the same trail. The other night while I was looking at the clouds I made the remark these clouds makes me dreamy. The old guy laughed and said, "They are just thunder heads." 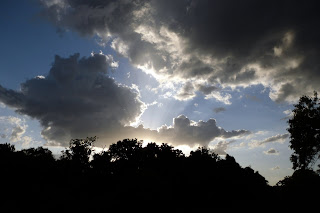 Last night there were a couple of Shuffleboard games going. This one is family, at least on this end of the court. I didn't get many shots from the opposite end as the sun was glaring too much. I just love the looks, the happy face of the woman in the back ground. Elam Zook is playing against his mother-in-law. Elam's partner was Lester Byler on the opposite end of the court. The Mother-in-law was in partnership with her husband. (Click to take a better look at the faces.) 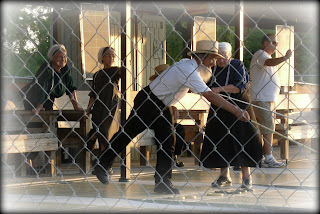 I think this young girl came with the happy face woman. She is intensively watching the game too. 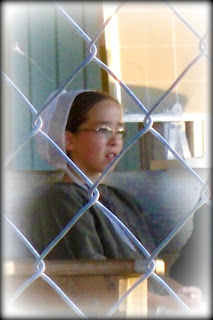 This is family too, although he comes from Belleville, PA instead of Lancaster. He wears no suspenders because his church made it optional or doesn't allow suspenders. I forgot which. 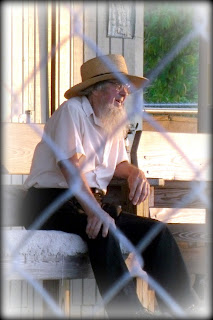 All in an Evening's Drive

There is hardly anything going on in Pinecraft, at least not compared to the winter months and yet there is enough action to keep life interesting. This evening three ladies were peacefully fishing down by the creek. 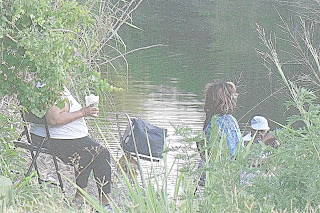 And the next minute I was hearing screaming and so I quickly biked over to the edge and this one lady was swinging the machete. Suddenly their world turned upside down when the fishing pole laying on the ground caught a fish and the pole was being dragged into the water and a snake came swimming toward the fish on the hook and chaos broke out. I quickly decided to keep my distance and turned my bike around... 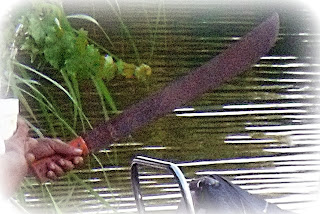 saw the crack peddler sitting on the fence. I left the park... 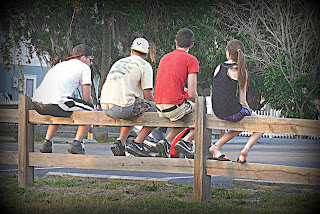 Two out of three women that live on Bimini Street are out riding tonight. (Click picture to enlarge) 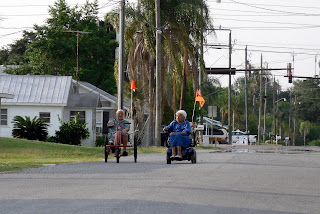 They rounded the corner and took off for the park. I followed them but by the time I entered the park they were on their way out again. They reminded me of children out on a joy ride, but it was a perfect evening to be out biking after an 88 degree day. 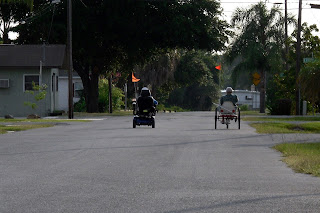 After the above two left the park there was only one homeless guy and myself in the park, that is until Bill Detweiler came biking back in. We visited until his phone rang and then I left to finish my ride. 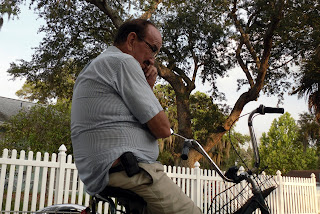 As I neared home I was hearing music, so I followed the source to my neighbor Sam & Martha's front door. Anna Yoder was also enjoying the evening outside. About every time they finished a song we could hear distant clapping of hands. After looking around a bit we spotted a young girl standing in their back yard listening and clapping to the music. She made our day. 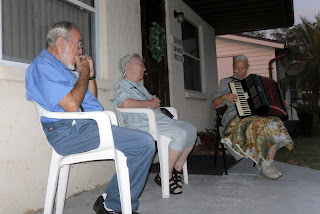 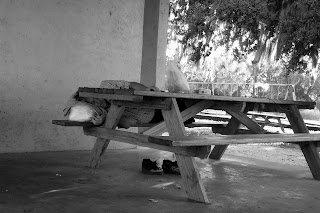 Tonight is Jimmy’s last night of sleeping under the bridge. It is his last night of being homeless. Today is his last day of being homeless. It is his last day of carrying his triple layer plastic bag of belongings with him where ever he goes. Tomorrow he is moving into an apartment and a group of people will help him out by giving of their surplus furniture.
Jimmy will never know how much he has taught me. I myself may not know how much he taught me until I run into other/similar situations that I will response differently because of getting to know Jimmy.
Jimmy says meeting me is the reason his situation changed. The only thing I ever did was I listen to him with my heart whenever he talked.  Never argued and disputed with him and his thoughts and encouraged him keep going.
About three weeks ago he was at his lowest to the point of being watched by the police force, basically because of how he talked in no uncertain terms to people in authority, whether they were doctors, nurses, or government officials at the Social Security office. After listening to him that time I returned home and said to God, Jimmy is of no value to society, absolutely nothing of value. Nor does he have any claim in God, or in His goodness and His blessings. Jimmy doesn’t want God, so why should God value him?
I asked God those questions and God answered me back, “In as much as you have done it unto the least of these you have done it unto Me.”   Later that very day I had a phone call from the Social Security office questioning me about Jimmy, how well I know him and what I know about him. The only references they had about Jimmy had been from doctors. After talking with them, she said, “Tell Jimmy he will get a letter about his disability, in a very pleasant voice. And so I knew his world will be turned right side up. And so that big day to move into an apartment comes tomorrow.  And this is his last night of sleeping under the bridge.
at May 13, 2011 4 comments: 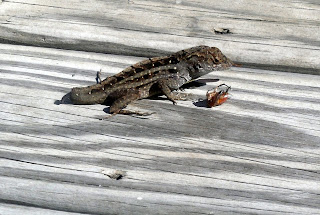 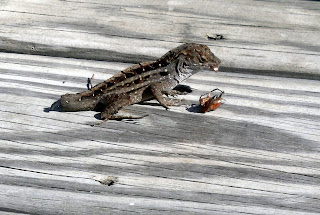 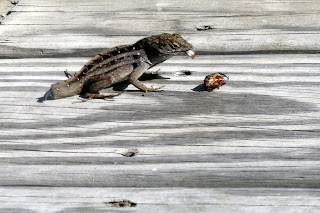 I was on the inside, taking pictures of him through the tinted window. I think he sensed I am around and knew where I was. 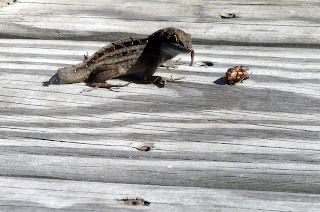 “Ella’s Wish” is a well written book. Having been born and raised Amish, I read Amish novels with a critical eye. My number one thing is to see how Amish the story is. I soon lost interest in seeing how Amish the story is, as I got wrapped up with the main characters’ lives.
Ella, as she faced life of a single woman after being almost married to Aden. Her parents, Daett and Mamm, who assumed they knew Ella’s heart and desires without listening  to what she had to say, of what she wanted to say.  Of Ronda who was aware and sensitive of what was happening in each heart without being told, without words. Of the young single Bishop who was seeking a wife, who was never challenged and never questioned his perspective and authority on any given subject. His word was law. And then came the young Deacon who preached fiery sermons of hell fire and brimstone, who by appearance was someone you kept your distance. Yet hidden under his sermons was a tender and timid heart and not quite so sure of himself. He was the father of three little girls and who lost his wife for some reason or another. Anyway both the Bishop and Deacon wanted Ella for a wife.
This book can be bought from Amazon, Barnes & Nobles, Christianbook.com.
at May 04, 2011 5 comments:

I was so totally surprised when I biked up to the Shuffleboard tonight and saw who is shuffling, women I had never seen shuffling before. I imagine in their younger years they did shuffle but not since I live in Pinecraft. So this is Dan Miller Barbara and Mahlon Anna or just Anna Yoder. 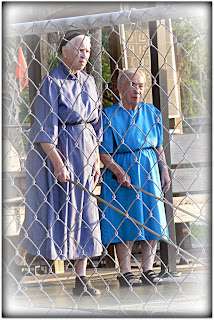 I quickly had to see who is at the other end of the shuffleboard. The women are Leanna Miller, her Mother Barbara and Vera Miller (I think). Vera moved in with Mahlon Anna and is more or less her caretaker. It is good to see Anna and Vera out and about. During the times Anna had Molly, her dog she would be out biking and walking her dog at the same time. Anna biked and the dog walked. 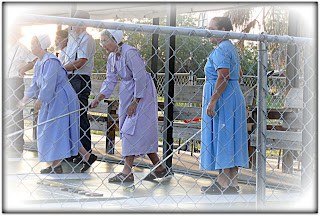 I can't forget John Henry for he is an old pro when it comes to shuffling. His wife left him today, just for a week and he will go up north and join her. 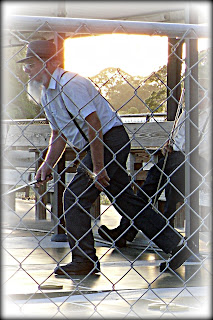