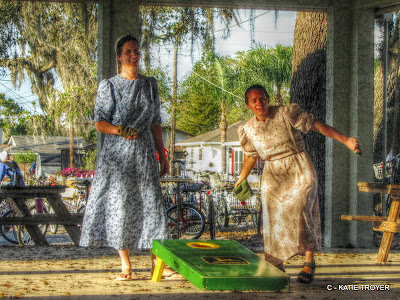 In the Plain Peoples' world the men take the lead, based upon the Biblical principal that the man is the head of the home, he is the provider, the protector and whatever else goes with that role. I remember well when I lived in the Aylmer Ontario Amish community that one family especially always walked down the road with the husband/father in the lead, walking from five to ten steps ahead of the wife and children. I don't remember if the wife walked next and then followed by the six children or if the wife walked with the children. I do remember well the husband always walking five-ten steps ahead. It never varied, was always the same. He was the head of the home without a shadow of doubt and took the lead. 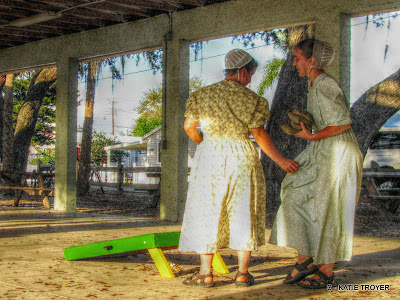 Down here in Pinecraft, most of the time the older men go their way and the women go the other way. They do their own thing. At the park the men are first when it comes to Shuffle Board, Bocce Ball and Corn Hole games. The men have seven Shuffleboards, whereas the women have one board. There are only a few women that play Bocce Ball and that is always if their husband is also playing. I have never seen women play Corn Hole until tonight. I don't know when the men left to do something else as I was down by the creek, but when I returned to the pavilion the men were gone and four of these girls were playing corn Hole. One was sitting on the sideline, after all only four can play at one time.